I just finished building a new desktop PC a few weeks ago. Finally had chance to post my rig. Yeay!

A great credit to reddit/buildapc people for helping me choosing the parts..! ;)

Sorry if the pictures are not really clear. 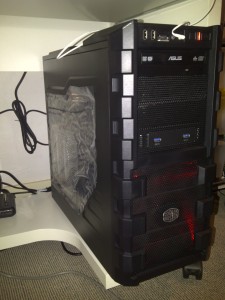 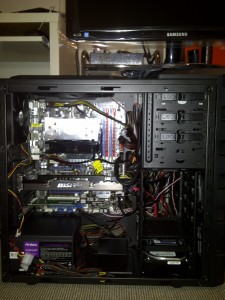 Most of the parts were bought from PC Case Gear (Australia).

I bought AMD 960T BE because the 955 Black Edition was sold out. I supposed to buy all parts a few weeks before this final buy, but was reluctant at that time. When I finally wanted to buy, it was already too late. Oh, well.

Seagate Barracuda; same thing. I planned to purchase Western Digital Caviar Black 1TB. It was $89 at that time; then the price increased insanely. I bought the Barracuda from a retail shop. Not a good choice I guess? Samsung Spinpoint is better, isn’t it?

I bought Crucial M4 when the Crucial website had 10% discount. I bought with the 3.5″ adapter but don’t know how to put it properly into the case =_=”. I ended up using the 3.5″ adapter coming with the case. A waste of money, unless someone can give me an insight ;)

Research before start installing the parts.
Preparation is critical: read online tutorials and discussions from online forum, watch video tutorials, ask some experienced people. It is very helpful when it comes for the real deal. At least you will have a pictures of what to do. Newegg has good Youtube tutorials to build a PC.

Patience.
I built this rig for around 10 hours; worked on it for some hours in night time. It was quite long because it was my first time and I did not want to mess up. However, it is very important to be patient. Simple mistake can ruin everything, especially when dealing with electronic components. You need some time to think and manage clearly.

Shoot when you find a bargain.
Sometimes, it is a bit unpractical to do especially if you plan to purchase online and the deals are spread to several stores. You have to deal with freight cost. However, if you can manage it then you can get some good bargains. Nevertheless, sometimes we face unexpected situation. The hard drive for example was caused by unforeseen disaster in Thailand (i.e. the flood). Thailand holds the majority of hard drive production. When the incident happens, it affects to hard drive price due to production disruption. Regardless, let us hope that Thai people can recover soon.

After all the hard work, we can be proud of our own build. ;)

Next Post: Issue With Crucial M4 SSD When Reaching 5,000 hours >>
<< Previous Post: For The Love of Their Children

Thank You for Sharing!